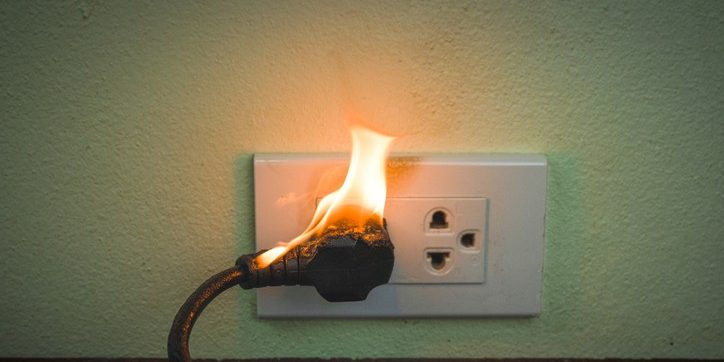 Preparing for how to put out an electrical fire, even if you don’t have a fire extinguisher, could be the difference between a minor accident and a major catastrophe in your home.

If an electrical fire is growing quickly and you’re not able to turn the electricity off, you need to put your safety first. To ensure that you’ll have a backup if you’re not able to put out the fire yourself, call 911 right away and be sure to tell the dispatcher that it’s an electrical fire. Then before attempting to put out the fire yourself, make sure you can see two clear pathways to safety. Once one of those two pathways becomes blocked or unsafe to approach, evacuate immediately. It is not worth risking your life.

If the fire began in an appliance or an overloaded cord, once you’ve unplugged the power source, toss baking soda over the flames. Baking soda contains the chemical compound sodium bicarbonate, which is also in Class C fire extinguishers. Keeping an open box of baking soda easily accessible could become a lifesaver if a small appliance like a toaster or crockpot bursts into flames.

Never Use Water While the Power Is On

Although it may be your first impulse, never use water on an electrical fire if your power is still on. Water conducts electricity, so if you toss water onto the flames, you are at risk of being badly shocked.

Once you’ve disconnected the electricity in your house, you have more options to fight the flames. A fire blanket is a great option if you don’t have a fire extinguisher. Fire blankets stifle the oxygen a fire needs to burn, putting it out entirely if it’s small enough. If you don’t have a fire blanket handy and you’re confident the power is off, water is now an option. Using a large bucket or even the spray nozzle from your sink, douse the fire with as much water as possible until it is completely out.

Prevent Electrical Fires Before They Start